The earliest Chinese dynasty dates to around 2200 BCE. It was located in the fertile North China Plain. Organized as a political system, Chinese dynasties created the Chinese state, which provided for a continuous transfer of power, ideas, and culture from one generation to another. From 206 to 220 CE, the Han Dynasty established the Chinese identity; Chinese people became known as People of Han or Han Chinese. The last dynasty, the Qing (Manchu) Dynasty, which ruled between 1644 and 1911, claimed control of a region including all of China, Mongolia, Southeast Asia, and Korea. Dynastic rule ended in China in 1911.

Europeans colonized the Americas, Africa, and South Asia, and it was only a matter of time before technology, larger ships, and the European invasion reached East Asia. European colonialism arrived in China during the Qing Dynasty. China had been an industrialized state for centuries; long before the empires of Rome and Greece were at their peak, China’s industrial cities flourished with the concepts of clean drinking water, transportation, and technology. Paper, gunpowder, and printing were used in China centuries before they arrived in Europe. The Silk Road, which crossed the often dangerous elevations of the high mountain passes, was the main link between China and Europe.

European colonial powers met fierce resistance in China. They were kept at bay for years. Meanwhile, the Industrial Revolution in Europe, which cranked out mass-produced products at a low price, provided an advantage over Chinese production. British colonizers also exported opium, an addictive narcotic, from their colonies in South Asia to China to help break down Chinese culture. By importing tons of opium into China, the British were able to instigate social problems. The first Opium Wars of 1839–1842 ended with Britain gaining the upper hand and laying claim to most of central China. Other European powers also sought to gain a foothold in China. Portugal gained the port of Macau. Germany took control of the coastal region of the vibrant North China Plain. France carved off part of southern China and Southeast Asia. Russia came from the north to lay claim to the northern sections of China. Japan, which was just across the waterfront from China, took control of Korea and the island of Formosa (now called Taiwan). Claims on China increased as colonialism moved in to take control of the Chinese mainland.

Though European powers laid claim to parts of China, they often fought among themselves. China did not produce heavy military weapons as early as the Europeans did and, therefore, could not fend them off upon their invasion. Chinese culture, which had flourished for four thousand years, quickly eroded through outside intrusion. It was not until about 1900, when a rebellion against foreigners (known as the Boxer Rebellion) was organized by the Chinese people, that the conflict reached recognizable dimensions. The Qing Dynasty dissolved in 1911, which also signified an end to the advancements of European colonialism, even though European colonies remained in China.

European colonialism in China slowed after 1911, and World War I severely weakened European powers. The Japanese colonizers, on the other hand, continued to make advancements. Japan did not have far to travel to resupply troops and support its military. In China, a doctor by the name of Dr. Sun Yat-sen promoted the independent Chinese Republic, free from dynastic rule, Japan, or European colonial influence. Political parties of Nationalists and Communists also worked to establish the republic. Dr. Sun Yat-sen died in 1925. The Nationalists, under the leadership of Chiang Kai-shek, defeated the Communists and established a national government. Foreigners were evicted. The Communists were driven out of politics. 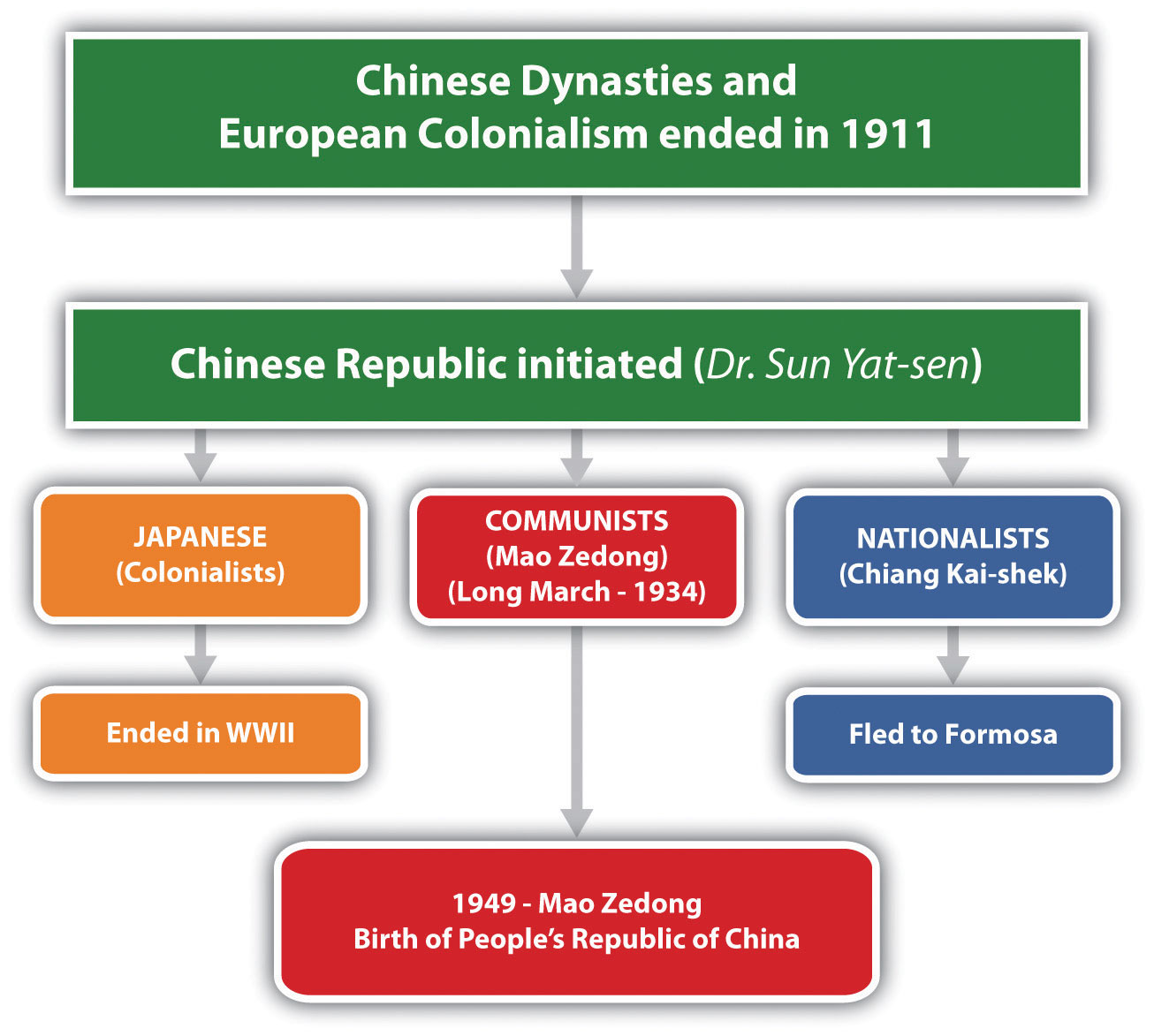 Nationalists, Communists, and Japan conducted a three-way war over the control of China. Japan’s military took control of parts of Northeast China, known as Manchuria, and was making advancements on the eastern coast. Nationalists defeated the Communists for power and were pushing them into the mountains. The Chinese people were in support of the two parties working together to defeat the Japanese. The Long March of 1934 was a six-thousand-mile retreat by the Communists through rural China, pursued by Nationalist forces. The people of the countryside gave aid to the efforts of the Communists. The Chinese were primarily interested in the defeat of Japan, a country that was brutally killing massive numbers of China’s people in their aggressive war.

In 1945, the defeat of Japan in World War II by the United States changed many things. Japan’s admission of defeat prompted the end of Japanese control of territory in China, Taiwan, Korea, Southeast Asia, and the Pacific. By 1948, the Communists, who were becoming well organized, were defeating the Nationalists. Chiang Kai-shek gathered his people and what Chinese treasures he could and fled by boat to the island of Formosa (Taiwan), which in 1945 had just been freed from Japan. Taiwan was declared the official Republic of China (ROC). The Communists took over the mainland government. In 1949, Communist leader Mao Zedong declared the establishment of the People’s Republic of China (PRC) with its capital in Peking (Beijing). Japan was devastated by US bombing and defeated in World War II; its infrastructure destroyed and its colonies lost, Japan had to begin the long process of rebuilding its country. Korea was finally liberated from the Chinese dynasties and Japanese colonialism but began to experience an internal political division. Political structures in the second half of the twentieth century in East Asia were vastly different from the political structures that had been in place when the century began.